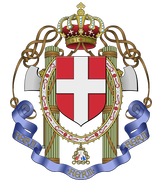 First World War showed to worldwide armies how aviation had changed the way to make war. Also Italians had been able to appreciate it, despite the lack of aircrafts and disorganization; both from strategic and purely offensive points of view, it was clear that aviation was the weapon of the future. In Italy this evidence was emphasized on different occasions, sometimes demonstrative , such as Flight Over Vienna (August 9th, 1918) by Gabriele D'Annunzio , but mostly on the field, thanks to victories by our aces , one out of every Francesco Baracca ( May 9th, 1888 - June 19th, 1919).


However, despite the positive movements of the highest ranks of the Army, economic situation left by the Great War in our country had to influence future decisions. For this and the lack of real political will to develop an independent Air Force, our aviation remained a subordinate rank of the Army for many years. 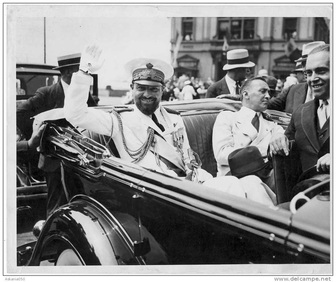 Italo Balbo in New York
In 1923, by Royal Decree, and with great difficulty, it was created the Regia Aeronautica (Italian Royal Air Force). For Italians it was love at first sight , thanks to the fact that propaganda of the time made great use of airplanes to acquire consensus, think of the great transatlantic flights, as Francesco De Pinedo flight(February 16th, 1890 - September 3rd, 1933) from Sesto Calende(near Milan) to Melbourne to Tokyo to Rome, in 1925 . Or the well-known North Atlantic Cruise organized by Italo Balbo (June 6th, 1896 - June 28th, 1940) for the tenth anniversary of Regia Aeronautica and Universal Exposition, which was held in Chicago in 1933. A flight of 25 Savoia-Marchetti S55X seaplanes, departed from Orbetello (near Rome) arrived in New York, and then in Chicago, where our Italian airmen were welcomed as heroes. 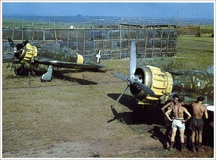 Macchi Castoldi MC200 during refueling
Despite those successes and technical capacity of Italian manufacturers , at the outbreak of World War II our aviation suffered from a lack of resources: our CR32s and G50s had proven their value in Spain during the civil war , they were good aircrafts, but were also based on the principles of the past and soon became obsolete. As to bombers, Italy’s situation was definitely better: with SM79 and CANT Z1007 already in service we had some of the best medium bombers all over the World.

Even if Macchi MC200 was an excellent aircraft, it was also often disadvantaged against the British new-generation aircrafts, although this gap was often filled by the ability of Italian crews. Fighting on almost all fronts Regia Aeronautica acted very well in North Africa, where it had to against Hurricanes, and even the arrival of new Macchi MC202 , new fast and maneuverable fighter (even if still poorly armed), was unable to stop the dominance of UK.
In the Mediterranean Sea, bombers and torpedo bombers fought successfully against the English fleet, and also over Greece land our pilots had to fight to thwart the advance of Allied forces. At the same time ineffective attacks were attempted several times to the island of Malta, which was considered to be the real thorn in the side of the conquest of North Africa by the Axis.

Meanwhile in Belgium was established an Italian Air Corp (CAI): fighters, G50 and CR42, and bombers, BR20 and CANT Z1007Bis, with the aim of helping Germany ( just for propaganda) to gain supremacy over the English Channel area and then England. 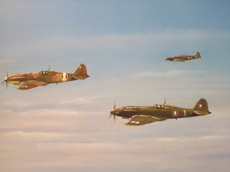 Litograph of an ANR Fiat G 55 formation
The pressure of events coincided with production of some of the best aircraft of World War II, aircraft such as the Macchi MC205V the Fiat G55 and G56, the Reggiane Re2002 and Re2005, the Piaggio P108 and CANT Z1018; all these failed to counter Allies advance, because they were not deployed in time to be decisive.

After the Armistice (Sept, 8th, 1943) Italy was divided into two parts; Regia Aeronautica also was split in two, forming an air force that aimed to counter the advance of the Allies on Italian soil, at the service of the Republic of Salò (i.e. Germany) called the National Republican Air Force (ANR), and the ' Cobelligerent Italian Air Force (ICBAF- Italian Co-belligerent Air Force) working alongside the Allies to liberate Italy from German forces. ICBAF was retrofitted with used aircrafts, like P39’s or Spitfires, coming from USA and GB.